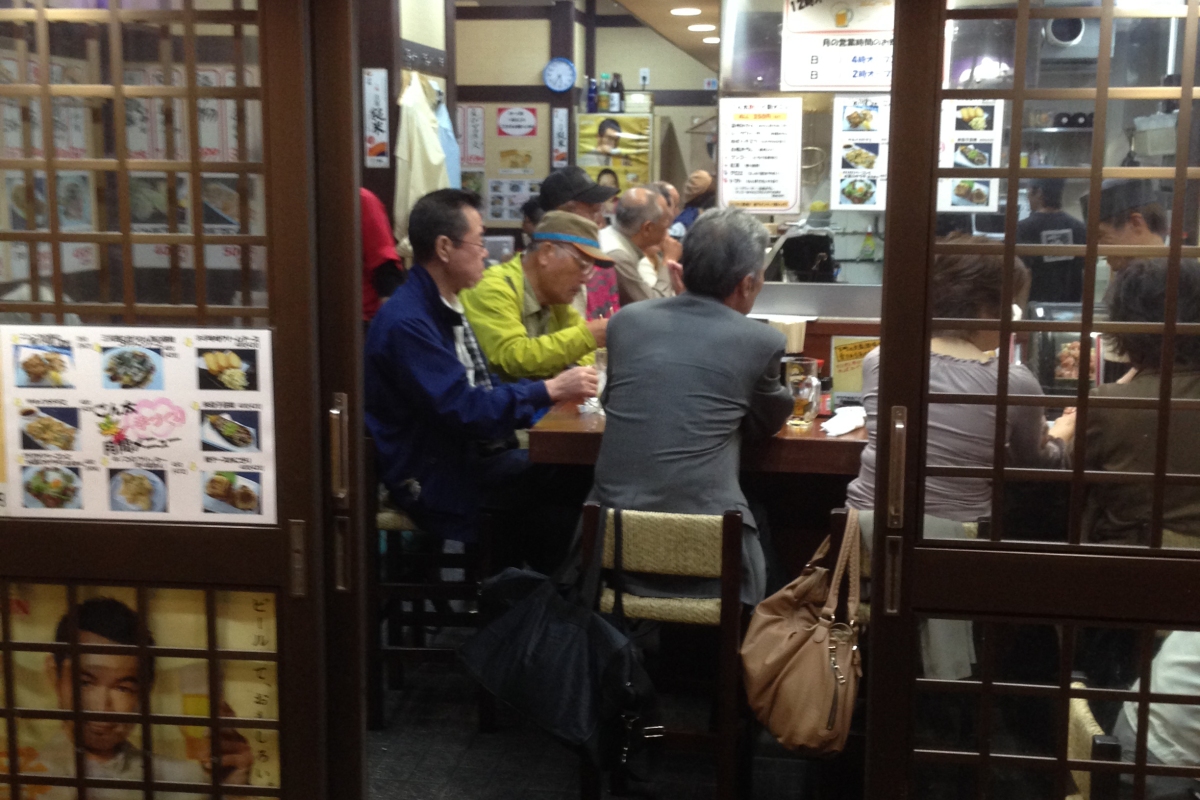 Last night, three of my friends and I had a great experience in the most quintessential of all Japanese dining and drinking establishments, the izakaya. People back at home in the United States or outside of Japan may be familiar with the word “izakaya”(Japanese – 居酒屋) and know it is similar to a Western bar or pub, but it is so much more. Last night’s experience at one of the local izakayas in Kobe was an experience I certainly will remember for a long time to come.

The hustle and bustle of Kobe’s Sannomiya neighborhood is similar to what you find in any of Japan’s major urban centers: people on every street corner yelling for customers to frequent their restaurants, twinkling neon lights glistening on every square inch of storefront, bustling night life, and convenience stores on every corner. I really love urban centers so I like the hustle and bustle of living in one of Japan’s largest cities, but last night was a distinct change of pace merely paces away from all of the glitz and glamor of Kobe’s most lively neighborhood.

As soon as you reach Ikuta Road’s terminus, you encounter the JR Railway’s overhead tracks which support trains bound for Osaka, Himeji, and a host of other places in the Kansai Region. Directly underneath those tracks is one of my favorite back alleys in all of Kobe. Lining this narrow alley, I encounter what I consider to be quintissential Japan. There are small shops with bicycles and greeters out front, eagerly luring potential customers to their (non-chain) restaurants, izakays, and stand up bars. These storefronts have lanterns shining and large banners and flags outside saying what their stores offer.

Last night, my friends and I ventured into an izakaya on this street and after we parted the cloth curtain in front of the Japanese-style sliding doors, we entered a place that is the type of place I always image when I think of Japan.

There was a large sushi counter and bar right past the main entrance. Older men smoked cigarettes and discussed the past and bygone eras while salarymen unwound from a long day’s work in the nearby entertainment district. Japanese-only menus lined the walls of the store while vacated seats were quickly filled by new parties eager to have a cold Kirin Lager and enjoy some a la carte items, which are standard fare in the izakaya. The atmosphere in this izakaya was electric – men yelled for servers to refill their beer, I yelled for more karaage (fried chicken) and some shrimp sauce, and a couple seated behind us were on a date.

The combination of the smoke filling the restaurant, the unique aromas coming from the kitchen, the sounds of orders being placed, customers leaving and entering the restaurant, and patrons calling for their next plate all make the izakaya a memorable experience in Japan. American izakayas do not compare to the energy at the izakaya last night.

I have attached a few pictures to help you feel the mood of what we saw. They do not give the izakaya the justice it deserves.