I will never forget the first time I fell in love with Tokyo, nearly three years ago on a blustery January night while wandering through Shibuya, hopelessly lost. Last night, I fell in love with another one of Asia’s great cities: Seoul, South Korea.

I have been to Seoul several times since I moved to Japan last year, but those trips were different because I always was there with my Korean friends from college. We went to great restaurants and also saw many of the tourist attractions, but I still felt like something was missing, and it was no fault of theirs. In order for me to fall in love with a city and better understand a city, I need to get good and lost in the heart of it all. Without stumbling up a steep alley, sampling bad street food, and running into youthful locals, how can you really know what the vibe in the city is, at any time of day?

As soon as I landed at Incheon International Airport, it was off to the races. Little did I know it, but I was in store to be good and lost from the beginning of this junket through Korea. When you arrive in Seoul, there are two options to get into city center: train and bus. I wanted to catch some scenery and try to nod off for a little between Incheon and Seoul, so I opted to take the bus into the city. Soon thereafter, I realized that I had woken up several stops past Seoul Station. On the right side of the street I saw several interesting street markets, so I decided to get off the bus and just go wherever the streets took me. Immediately I was immersed in a vibrant street market like I had not seen anywhere else in Asia, except for Kuala Lumpur and Bangkok. 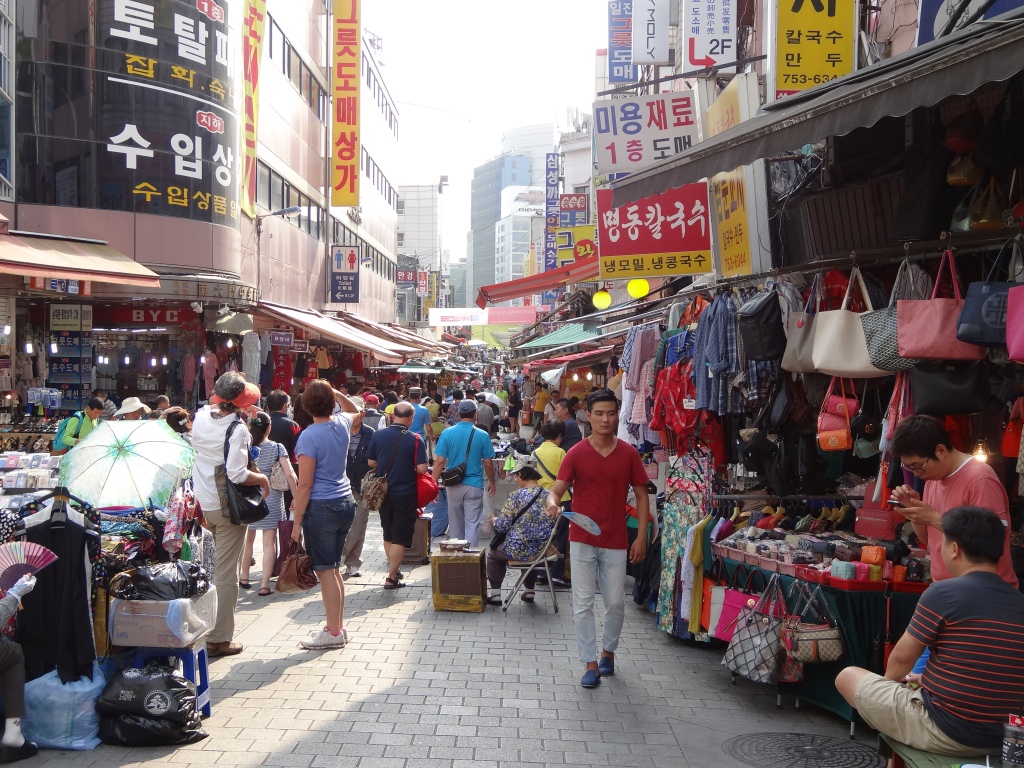 The above photo shows the very tame and calm entrance to the maze of streets bustling with food, clothing, and trinket transactions. In one ear I hear Japanese tourists conversing, while in the other ear I hear American tourists chatting with Korean natives. It was quite a sight to behold. As is customary in these street markets, I never come for the bags or the garbage, I come for the food. The food in these markets did not disappoint.

As I wandered through a back alley, I came across an interesting stand which had many different foods served on a stick. These are very common in Japan, but the Korean version looked somewhat different so I decided to give it a try. Unfortunately I did not like the taste of any of these, except for the spicy sausage. These sticks appeared to be filled with and covered by one of my least favorite foods in all of Asia, a mystery fish stick. It’s rubbery and disgusting. 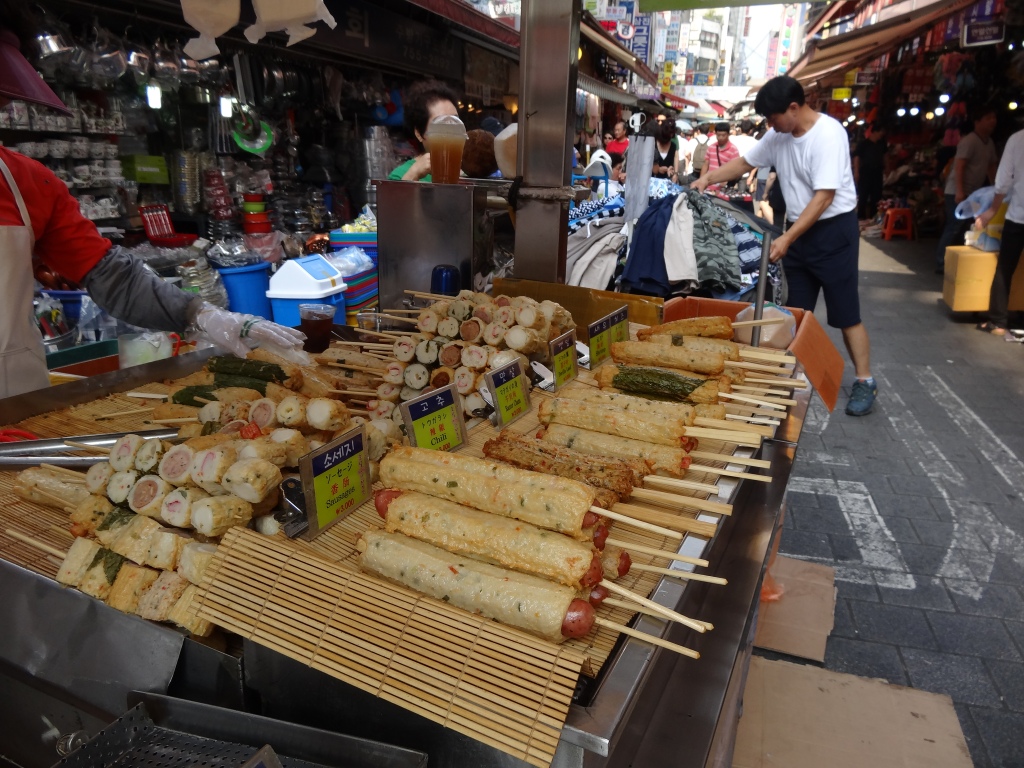 As I was posting and sharing some photos from Seoul on Instagram and other sites, one of my Korean friends back in the United States sent me a message and urged me to go to Hongdae, which is a central hub for parties, bars, and younger people in Seoul. It is situated in the western part of the city, adjacent to Hongik University. I am so glad I took her advice!

This neighborhood was exactly the kind of place I was hoping to find this time in Seoul. The streets were bustling with activity and there were interesting shops, pubs, and restaurants on every single corner for several blocks. In amongst the controlled chaos, there were also many interesting street performers and others performing side shows and songs, both in English and Korean.

Next up on the agenda was finding more street food in Seoul. Fortunately, there were more busy and bustling streets packed with small boutiques and street food vendors in close proximity.

One of my favorite Japanese street foods is called takiyaki. This food is a baked pastry in the shape of a fish filled with red bean paste and served so that you can eat it with your hands. They are very popular in Kobe and one of my favorite treats on cold winter nights. Little did I know I would encounter an even better, Korean version, of taiyaki in Seoul. Needless to say, I do not think I will be eating Japanese taiyaki again.

This photo is the beautiful Korean takiyaki. The bean paste-filled pastry was delicious, but it had a special twist! The fish’s mouth and body was filled with vanilla frozen yogurt topped with peanuts. In addition to this, there was a skewer of chocolate-covered fruits. Even further, this delight was only three dollars!! I will never forget eating this while traversing Seoul streets.

As the day came to a close and the sun set between the skyscrapers, I received a text message from one of my friends from Japan informing me that he was in Seoul with a few of our mutual friends for the night. I headed in their direction and we enjoyed some snacks and drinks before I returned to the airport for my flight home. I had a great time in Seoul and will certainly be back in the near future.

Do you have any good memories of Soul? Share them here! 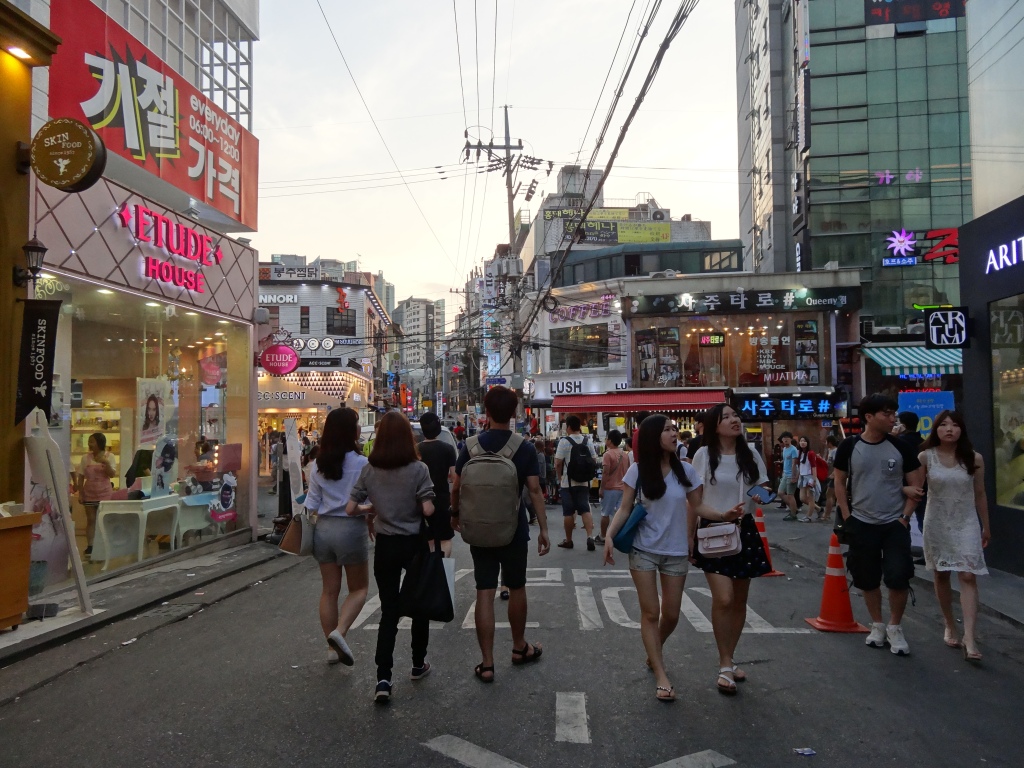 One thought on “Stunning Seoul”