As an American living in Japan who loves to travel, the topic of the road trip comes up in conversation from time to time. In a country the size of California with copious amounts of toll roads and highways, I often encounter questions like: “How can you possibly afford to drive on all those roads?”, “What is the purpose of the road trip; where do you end up going in the end?” and a host of other questions pertaining to the reasons for going and embarking on a quest as exciting and draining as the road trip. I often tell them that our highways are (for the most part) free, and the reason for going is to go see a distant point, but you often discover a lot about your country, its people, and yourself along the way. Several weeks ago, my friend Andrew and I embarked on a  road trip from our hometown in central Pennsylvania to the bountiful Midwest. Here is what I saw and encountered along the way during the first day of our road trip in July, 2014.

As is the case anytime when Andrew and I hit the road, only a few things are certain: our destinations and the ridiculous amount of drive time we have crammed into our itinerary. With three American flags inside the vehicle and an Ohio flag pinned to the roof of his Subaru, we rolled out of Central Pennsylvania bright and early in the morning with Sheetz coffee in our hand, bound for our first destination, Indiana Dunes National Lakeshore, via the Pennsylvania Turnpike.

After several hours on the road, we had traversed the winding turnpike through Pittsburgh, West Virginia, and through all of Ohio. The most interesting aspect of this stretch of road from the northeast to the midwest is how much the terrain changes in a relatively short period of time and distance. You go from the mountainous areas from Pittsburgh to Wheeling, West Virginia, to a remarkably flat and rolling hillside in eastern Ohio to flat, fertile farmlands of central Ohio, starting near Columbus. As a child, I was never able to appreciate the beauty of the drive from Columbus to Cincinnati (which we made as a family countless times), but finally it all came into the light for me on this trip.

We had both done this stretch of the trip countless times before, so there were no spontaneous stops for the fist several hours of our travels. Things changed and the road trip truly began when we reached an American cultural icon: South Bend, Indiana.  Andrew said, “Hey, let’s see Notre Dame,” and we quickly exited and began our first side trip of our road trip.

As glorified as Notre Dame is every time the Fightin’ Irish are on television for their football games, I did n to think there was any way the campus would actually measure up to the image many of us have of this school, but I was wrong. The roads were pristine, the grass was green, and the campus and its landmarks were beautiful. As someone who went to school in Philadelphia, I could not get over the amount of green space and the sheer size of this campus. here are a few highlights from our drive. Of course I had to get a photo with the iconic “Touchdown Jesus.”

After about an hour in South Bend, we frantically realized that we needed to hurry and drive very quickly to Indiana Dunes National Lakeshore if we were to make it there in time for sunset and a chance to see the iconic Chicago skyline from the eastern shores of Lake Michigan. Andrew is somewhat of a National Park aficionado yet he had never heard of this place. As a result, we both were excited to discover a new, highly rated National Park. As we left South Bend, clouds began to pop up off in the distance and we worried we might not even be able to see a sunset as azure skies quickly turned to grey. Suddenly, as we passed by rail tracks, factories, and symbols of America’s bygone industrial era, the sun broke through the thick cloud cover and we raced into our parking spot at Indiana Dunes with just minutes to spare before the sun would inevitably set on Day 1 of our road trip.

The race was on to make it to the lake to see the sunset, but one large and unexpected obstacle stood in our way: gargantuan sand dunes in Indiana. Obviously, Indiana Dunes National Lakeshore is billed as a lakeshore with dunes, beaches, and camping locales, but I never expected to see the types of dunes it offered. Somewhere a cross between the elegant East Coast beaches, Kitty Hawk, North Carolina, and some other places I have seen in the past, we had a long trek ahead of us. This scene is certainly something I did not expect to see on the southern shores of Lake Michigan.

We saw a beaten, albeit it lightly, foot path heading over the dunes in the general direction of the lake and decided to take it in spite of the snake and animal tracks criss-crossing the knee-high weeds on both sides of it. We were here, and by God, we were going to see the sunset we came to see. The scenery in between Lake Michigan and the parking lot as seen from these dunes was truly unforgettable as the winds picked up and the sky began to take on an amber glow. 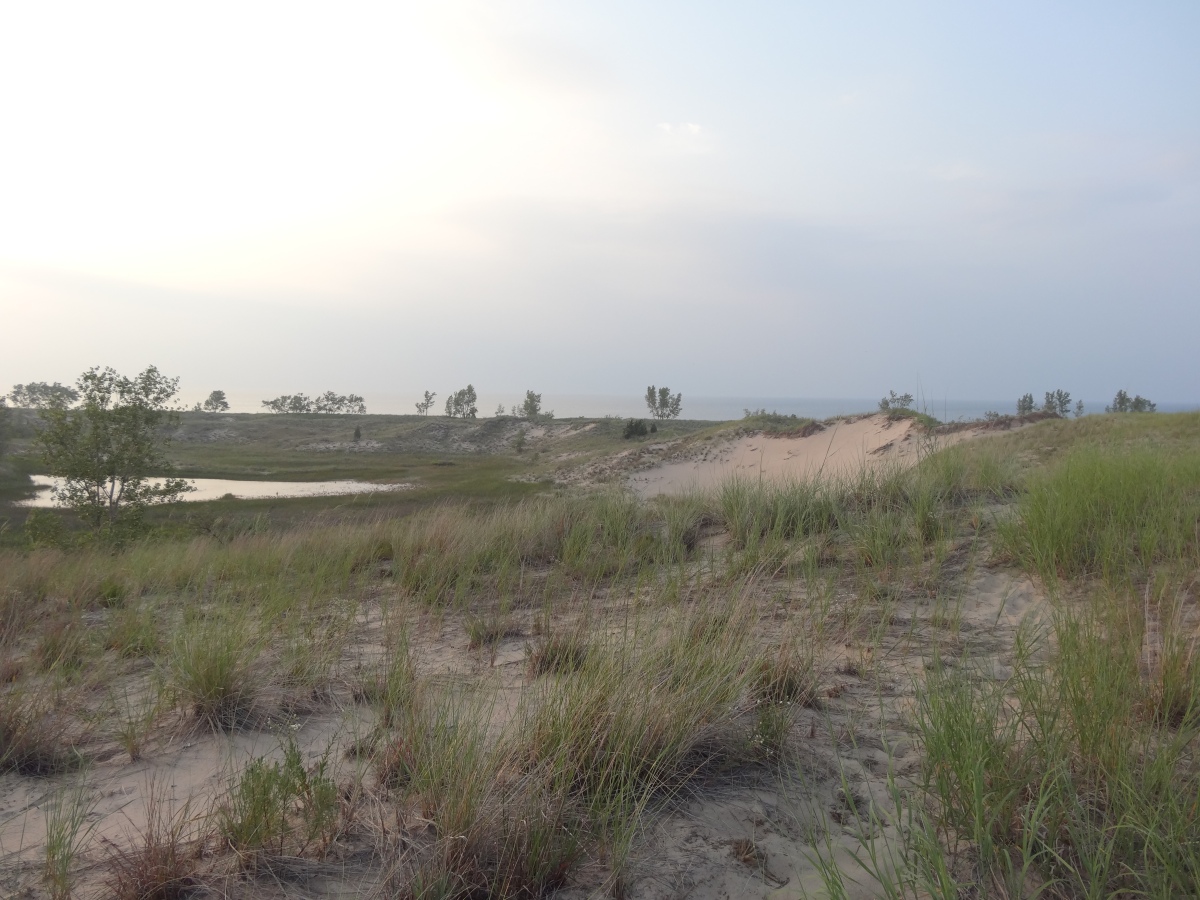 We continued up and down the path on the edge of the dunes and encountered one final, steep, pathway up and down the final dune towards the lakeshore. At its summit, the view of the sunset was incredible. Even though clouds had returned and we could  not see Chicago, we took in the final few minutes of sun from an incredible vantage point.

We dashed down the dune and ran into one final surprise before capturing more photos of this sunset: a yellow rope with a message from the National Park Service indicating no entry on the dunes because of “dangerous conditions.” Fortunately, there was no such barrier on the other side or we never would have been able to see and remember such tremendous natural beauty.

Once the sun passed behind the ominous clouds, we scurried back to the car to continue to Chicago for our first of two nights in the Windy City. The next post will pick up from there.