Since the end of World War II, Taiwan has been the subject of tense international security policy in Asia. Often serving as a flashpoint in Sino-Western diplomacy struggles, Communist China claims the island as theirs. Prior to this conflict, Taiwan was ruled as a part of the Japanese Empire from 1895 until 1945. Japanese colonial rule still is very visible when it comes to architectural influence throughout the country, especially in Taiwan’s most historic city, Tainan.

Nearly three centuries prior to the Japanese colonial period, Taiwan was under control of the Dutch East India Company for nearly four decades. The cultural and architectural remnants of Dutch Formosa are few and far between, but there are several examples of impressive forts and military installations that still stand in the country. I visited a small Dutch fort in Taipei last year with friends and I was fortunate enough to have my friend David take me around Tainan this year to show me some of the city’s most important historic and cultural landmarks. Fort Zeelandia, the most recognizable Dutch fort in Taiwan, was our destination for the afternoon of my second day in Tainan. 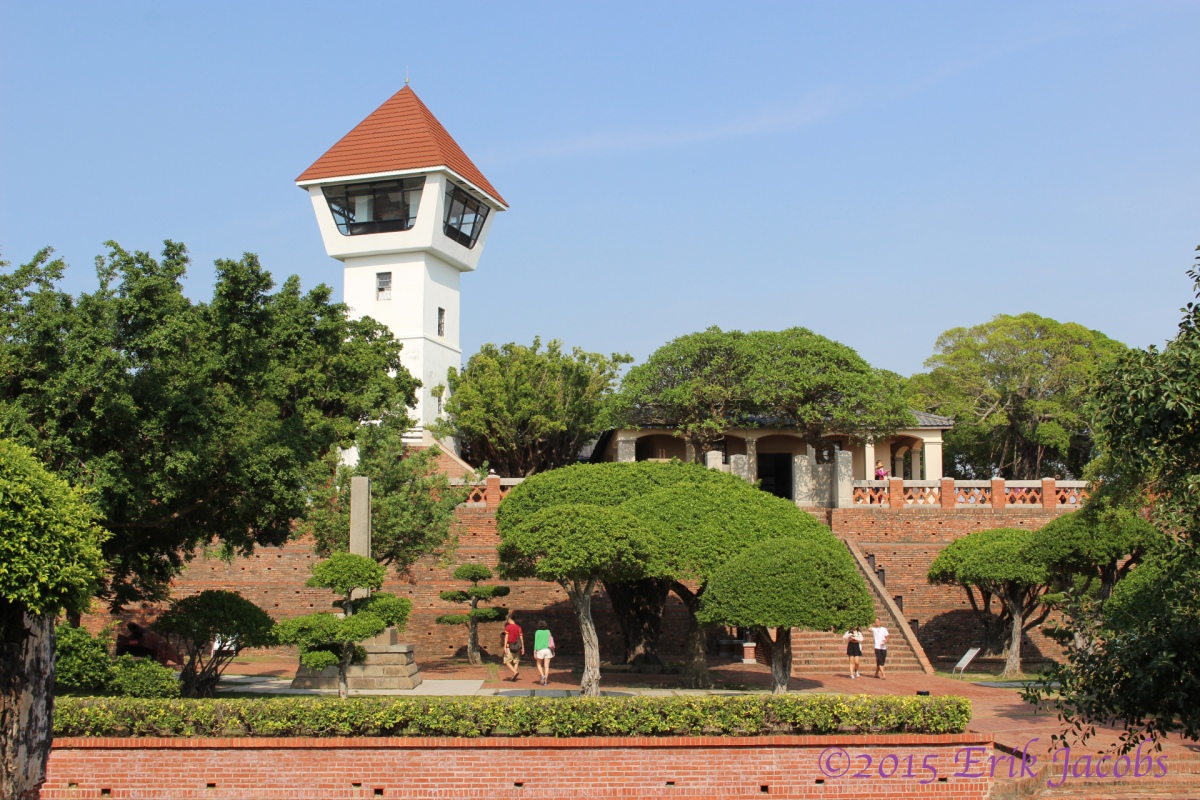 Construction on Fort Zeelandia began in 1624 as the Dutch East India Company looked to expand its foothold in Taiwan and expand its power in Asia outside of Indonesia and Malaysia following a disastrous naval defeat at the Battle of Macau in 1622, where Dutch forces were repelled following an attempted siege of the Portuguese city.

Until its fall in 1662, Fort Zeelandia served as an important outpost for Dutch trade with its colonial outposts in Japan and the rest of Asia as well as a strategic military base. 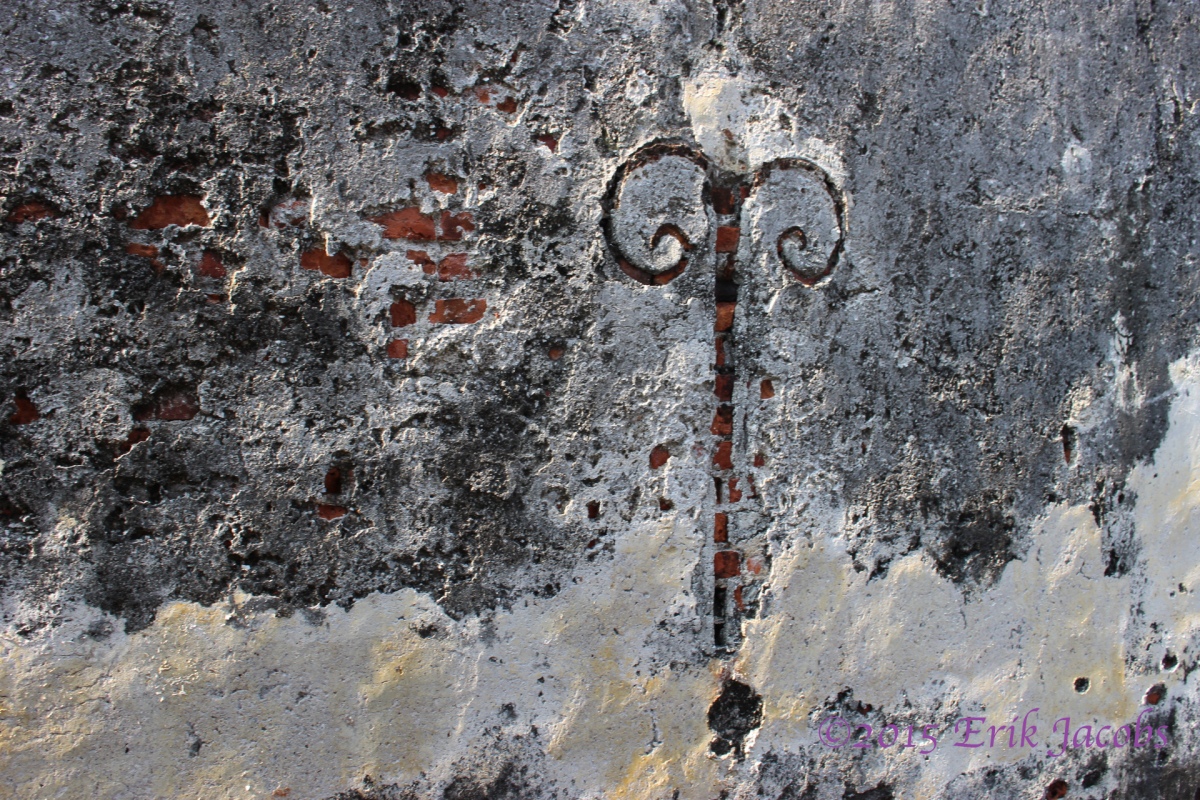 As soon as you arrive at the fort, two things stick out to you: the unique watchtower which overlooks the entire site and the old, disintegrating stuccoed brick wall which surrounds large parts of the fortification. Hooks like the one seen above aided in fortifying and strengthening the wall’s construction. It is very cool to see the perfect outline which still remains today. 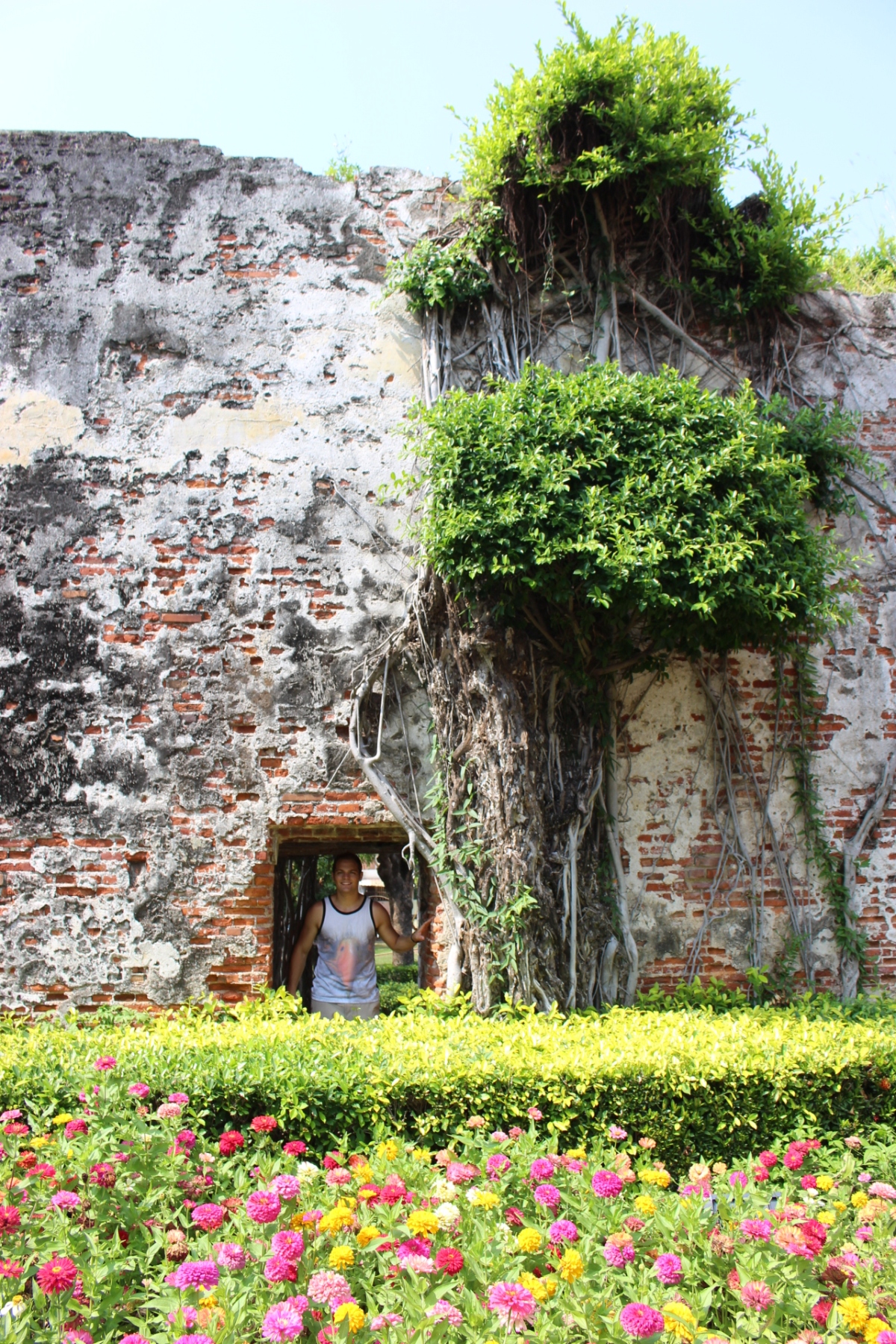 Nature has begun to take control of some parts of the wall, too, but the wall’s integrity remains strong, as do the Dutch flowers in the foreground of this photo. 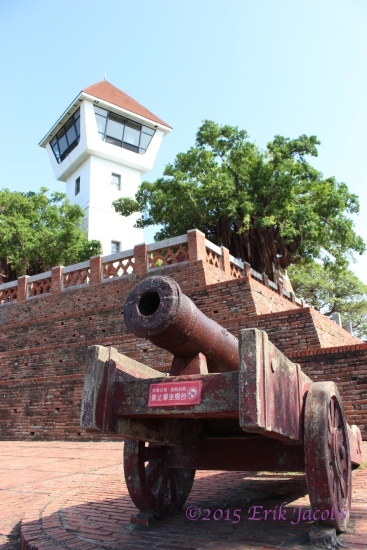 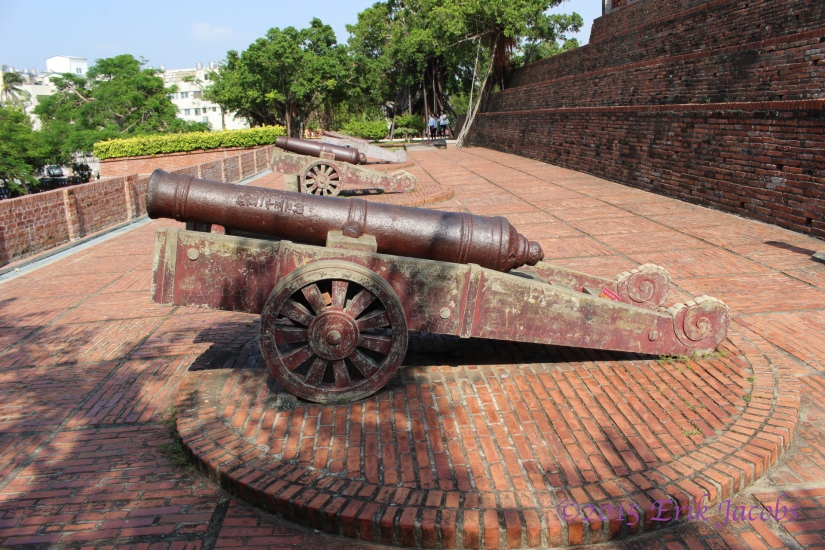 Once you climb the stairs towards the watch tower, on the left you can see several replica cannons which defended the fort from foreign attack or Taiwanese siege for several decades. These guns would see heavy action for nearly nine months between 1661 and 1662 before the Dutch surrendered to Taiwanese hero General Koxinga following the Siege of Fort Zeelandia on February 1, 1662. His imposing statue stands to the right of these cannons and other various armaments. 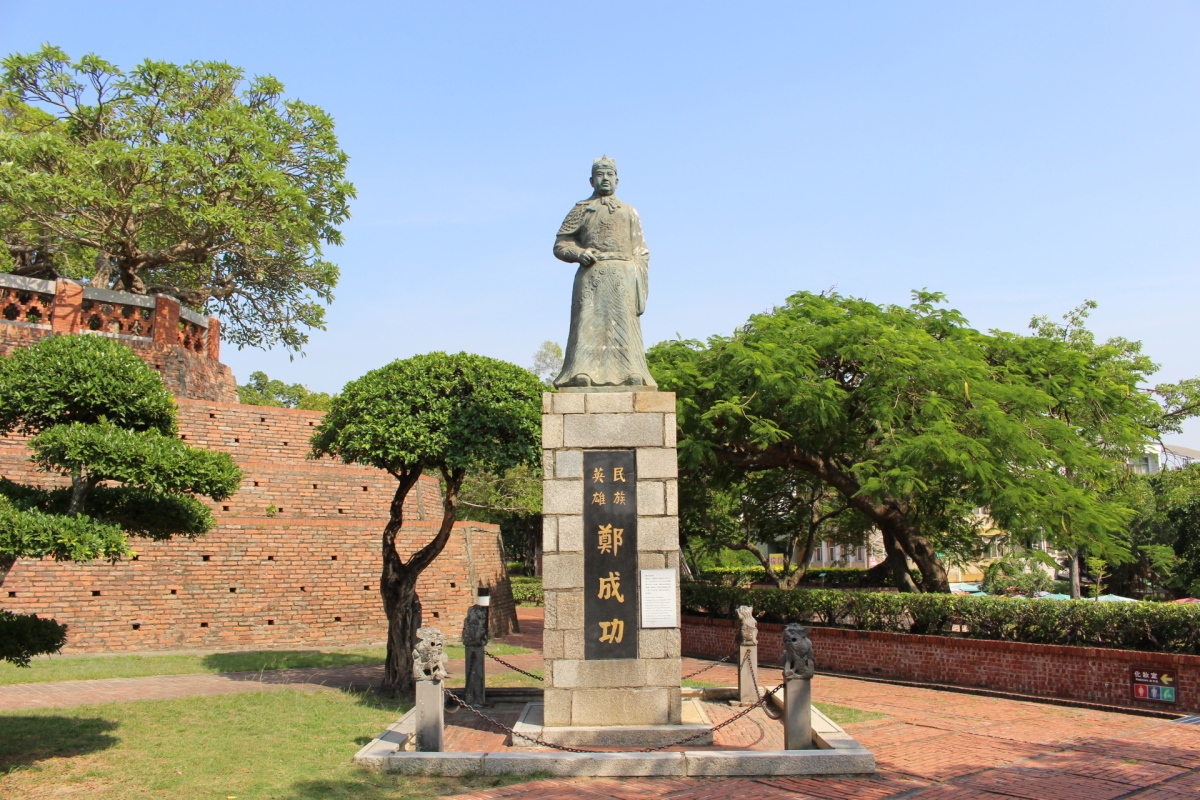 Definitely one of the more tourist-oriented destinations in historic Tainan, I recommend visiting Fort Zeelandia and taking time to explore and learn about Dutch Formosa and the Siege of Fort Zeelandia. You will be met by some beautiful flowers and flora at every corner. 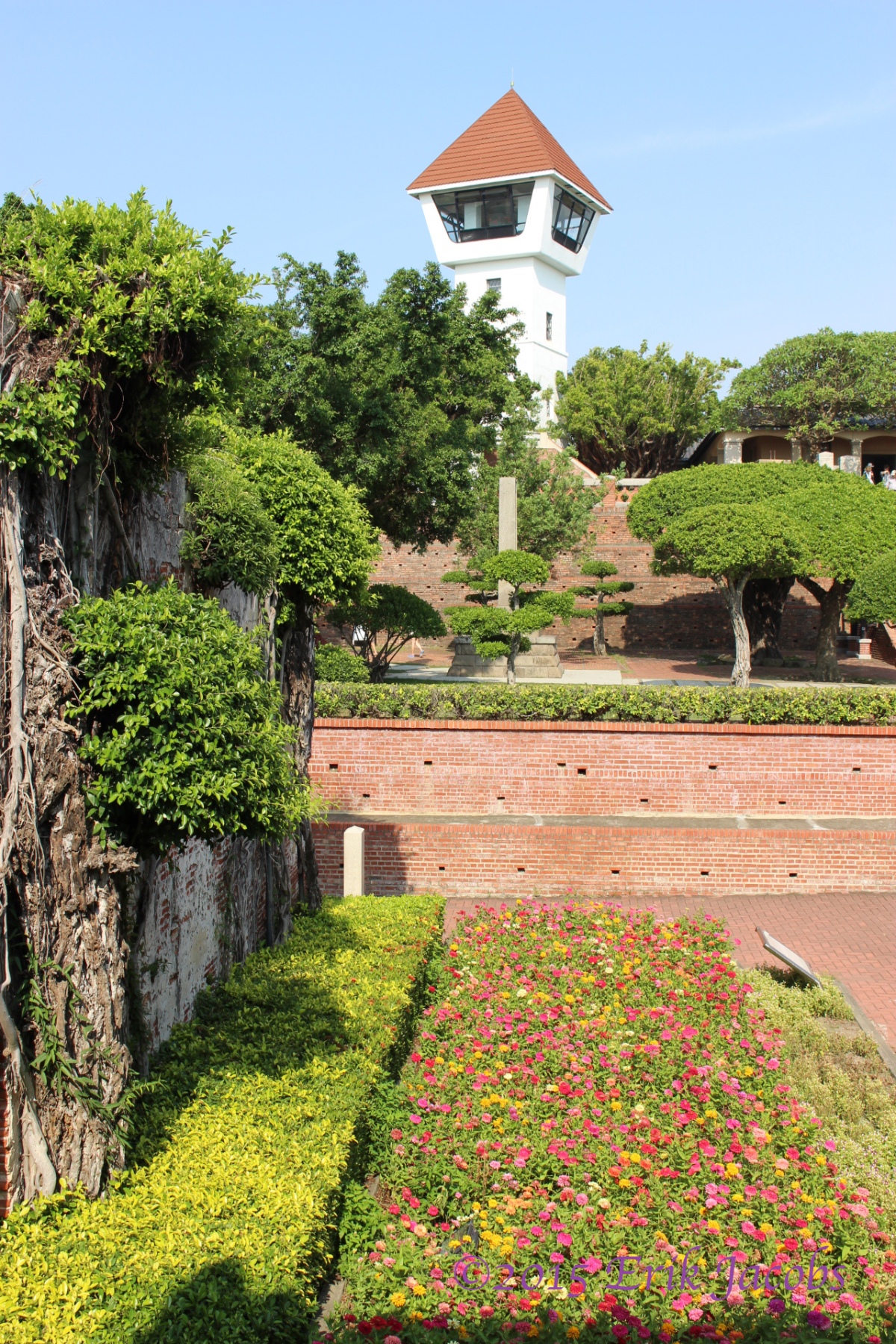