For anyone who has never been to the two Special Administrative Regions in China, what I am about to say could sounds shocking to some. The same could also be said by those of you that have been to Hong Kong and Macau. I am going to say it anyway, though. I liked visiting Macau as much as I liked visiting Hong Kong last week. Both cities are great, but for very different reasons. The fusion of European and Chinese history and architecture, the different parts of the island and accompanying lifestyles, and the amazing photographic opportunities on the streets highlight some of the reasons why I loved my time in Macau.

The whole day started off bright and early as my friend and I left our hotel in Hong Kong at 5:15 AM to start the walk from the Admiralty Station area to make it to Hong Kong – Macau Ferry Terminal in time for a customs check before our 7:00AM departure. The sun still had not risen and this offered a unique look over to Kowloon across Victoria Harbor. 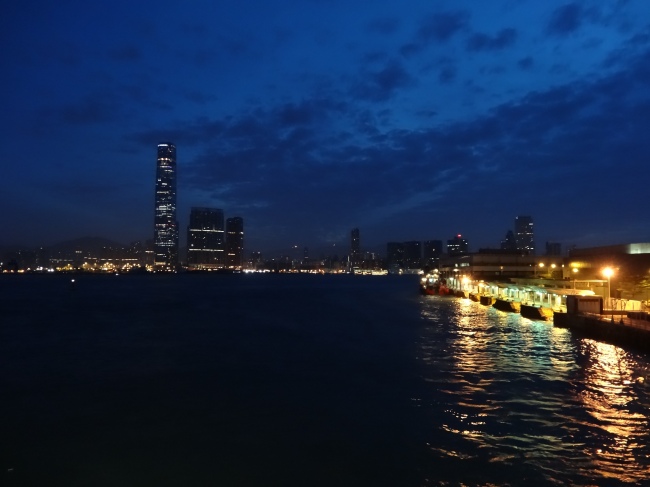 After the most cursory of all security checks (literally presenting a passport and walking through a line without metal detector check or bag inspection), we were aboard the TurboJET ferry with an 8:15 arrival time in the former Portuguese colony. As the boat swayed at the dock in Hong Kong, I worried about sea sickness, but that fear did not come to fruition. Nearly as soon as we exited Victoria Harbor and began passing through the many smaller Hong Kong islands, the easy and smooth ocean lulled me to sleep.

After dealing with some pushy mainland Chinese at the immigration stop in Macau, we were through but there was one big problem: no currency exchange desks or information desks were open. It sure was weird to see Portuguese on a sign in Asia. I had read in several places that you could literally travel through all of Macau for free on casino busses, but we wanted to have a map to make sure we knew where we were going. After getting our map, we found out the worst-kept secret in Macau was true: you can travel virtually anywhere on the island, for free, on a casino shuttle bus. We boarded the shuttle bus to the Wynn to position ourselves for a morning and afternoon traversing the famous Portuguese parts of town.

After a brief taste of the opulence and wealth that pervades Macau inside the shopping areas at the Wynn and on the casino floor, we began our walk around Nam Van Lake (past the Grand Lisboa) towards the government house to start our journey. Almost as soon as we arrived, I was enthralled with how well the Chinese had preserved the Portuguese and European architecture in Macau. Unlike Hong Kong, many of the older buildings from colonial rule were still in tact and vibrant. The colors on the administrative government building are something you will have to see to believe. I felt like I was somewhere in the middle of a Caribbean colony. It was odd to see a Chinese flag atop this building, but the colors were so vibrant.

After a few more photos of the surrounding gardens and lotus pond, my friend and continued onward to the famous St.Lawrence Church where I witnessed something you could only find in Macau. 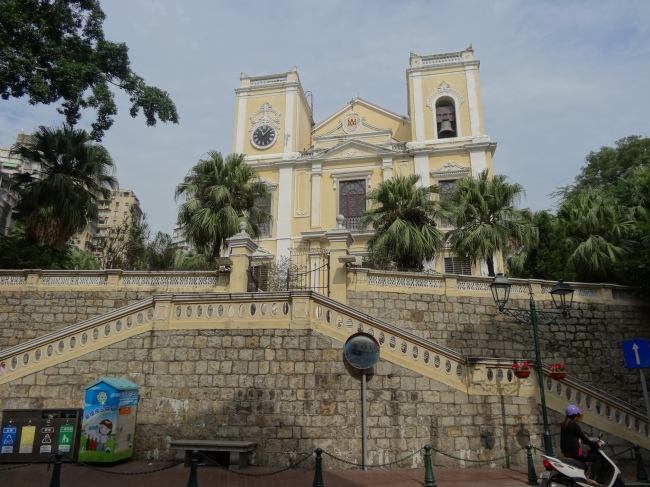 Amidst the bustle of mopeds and motorcycles on every corner, a Catholic nun walked down the street with several other people. Here is a photo of that unforgettable moment.

You could never capture a moment like this in Hong Kong. The fusion of East and West was so evident outside of St. Lawrence Church. I loved watching the bicycles and motorcycles make the hard left turn in front of the church to continue down some more narrow streets where other bikes and pedestrians waited. Here is a shot of the area surrounding St. Lawrence Church.

The sounds of a lively colonial city still emenated as we walked up the tiled slopes of this part of Macau with our sights set on finding Senado Square and then taking the famous walk through Macau to the ruins of St. Paul’s Cathedral. Fortunately for us, we were sidetracked and encountered even more mosaic-covered plazas and beautiful churches along our meandering route.

There were more bikes along the way, too. 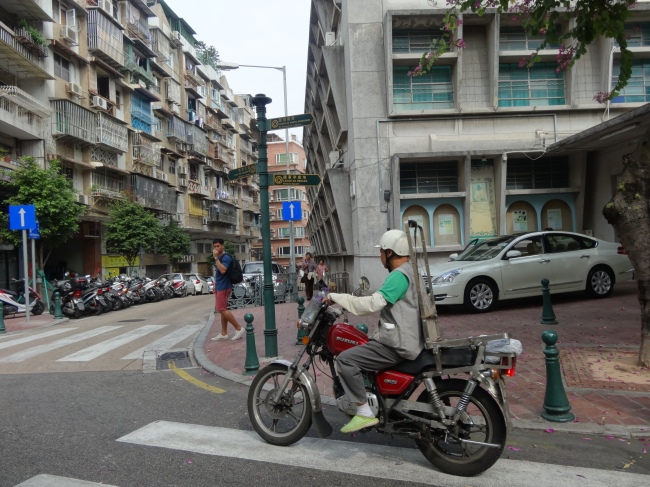 As we walked through more cobblestoned streets where Asian-style architecture was right next to European architecture, I fell more in love with Macau as I took each passing step. Originally my friend and I had planned this trip to Macau as a nice excursion to gamble a bit and check out the view from Macau Tower, but we quickly realized that we needed to spend an entire day making our way through the “other part” of the city, away from all of the glitz on the south side of the island. It was a great choice and one I will never regret. Over time, the number of tourists and other people picked up and we knew we were nearing the famed Senado Square in the heart of Macau’s Portuguese-influenced area. Just like that, the iconic mosaic-tiled square was upon us. As if it was a scene from a movie, we entered Senado Square as a band on the street played the song from the Star Wars cantina bar and here is what we saw. Everything from the teeming energy on the square to the architecture made me think I had been transported to Europe. It was impossible to believe that we were seated in China. I wished I had a time machine to go back to the mid-19th Century or the early 20th Century to see this location in its colonial heyday.

Down on the square, my friend and I even ran into one of our friends who lives in Japan by mere coincidence. The world is such a small place.

From Senado Square, my friend and I navigated through the quintessential Asian street market to make it up to St. Paul’s ruins. As bartering for a fresh Portuguese egg tart happened on the left, more negotiating over the price of famous pork happened on my right. A couple tried to push their newborn up the hill in a stiller, and I saw a Dairy Queen store and Nike outlet near the end of the passageway. This controlled chaos is one more reason why I loved this walk through old Macau. European streets were dominated by some of the best street food in all of Asia.

As soon as this chaos broke, the reason why we began this journey appeared on the horizon: the ruins of the beautiful St. Paul’s Cathedral, destroyed by fire centuries ago. The scene was beautiful. An immaculately constructed Catholic facade sits atop several flights of stairs in the middle of the bustling Asian market. Behind it all, you can see the high rise buildings of new Macau. I only wished that I could have seen this church before its destruction. At that moment, the sun broke through the crowds and offered up an even better view of the ruins. At that moment, I was convinced that Macau would continue to be one of my favorite travel destinations– and a place I would want to see again in the future. As much as I loved Hong Kong, I did not encounter these types of cultural treasures during my two days walking the streets of China’s other Special Administrative Region. 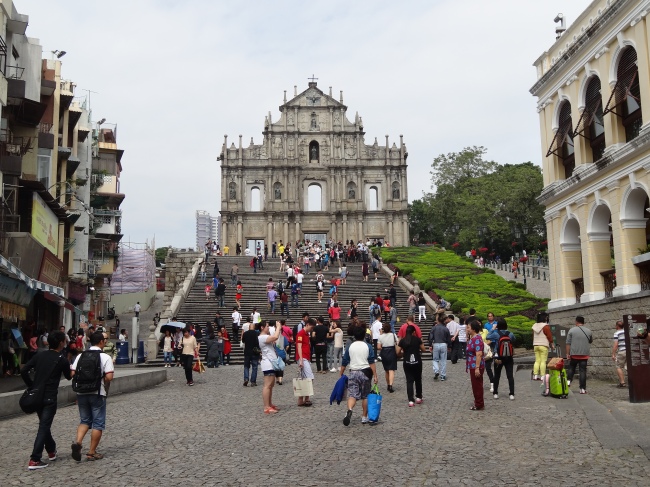 My friend and I did not stop there. We visited the fort adjacent to St. Paul’s to see another Portuguese legacy in this part of the city. The key component that helped the Portuguese stave off a Dutch invasion  in 1622, Fortaleza do Monte offered more stunning views of the Macanese skyline and helped emphasize the unique fusion of East and West, new and old, that Macau has to offer to even the historical novice or casual day traveler. 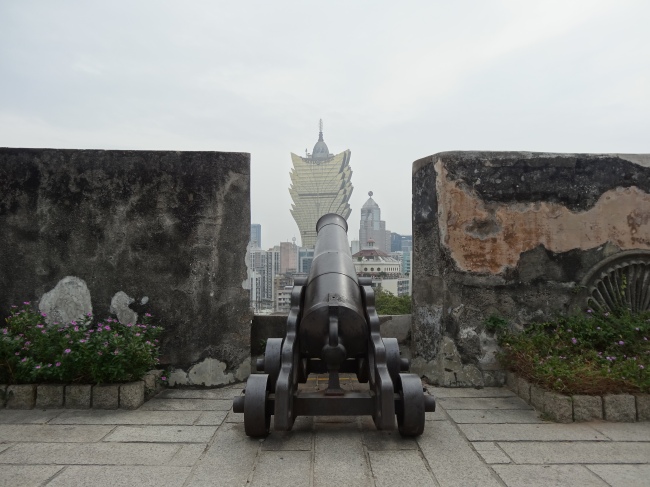 In between a stop at the Grand Lisboa and taking in a show at another casino, my friend and I also ventured to Taipa to see some more colonial sites and take the chance to sample some Macanese and Portuguese food on the streets. As well preserved as the Senado Square district was, I thought Taipa was even more well preserved. Whole blocks were painted to period colors. Colonial artwork and buildings dominated the landscape. There were even numerous Portuguese restaurants lining the streets. This type of neighborhood is another site you would not be able to find in Hong Kong because of the development and expansion the city saw since the change in economic policy in the 1970s. We even stumbled upon a Lusophonic festival in this part of the city.

Of course a day in Macau is not complete without a trip to the Grand Lisboa to gamble and a trip to Taipa Island to see a show, but I wanted to focus this post on all of the unique historical sites that Macau has to offer, making it one of the most interesting and memorable places I have ever visited. Growing up close to Gettysburg, Washington, DC, Antietam, and Harper’s Ferry, I have always had a deep appreciation for history and historical preservation. When I came to Macao, I expected much of Portuguese colonial legacy to be eliminated for a host of reasons, but I was pleasantly surprised to see much of it in tact, preserved for future generations to appreciate. Something about the cobblestone, the mosaics, the buildings, and prevalent appearance of Portuguese give the world’s most densely populated city a different vibe. This fusion of cultures, languages, foods, and architecture makes Macau a photogenic city with so many unique experiences around each corner. I loved Macau for very different reasons than why I loved Hong Kong, but it is a very worthwhile destination in the region. I went to Macau skeptical about how good of a place the island would be, but I left knowing it was an amazing experience that I will never forget.   I will put a post in the future about how nice the casinos and Macau Tower were, but this post is dedicated to why Macau is as good as Hong Kong and why any traveler to Hong Kong has to take at least a day trip to Macau if they have the time. It is an unforgettable destination.