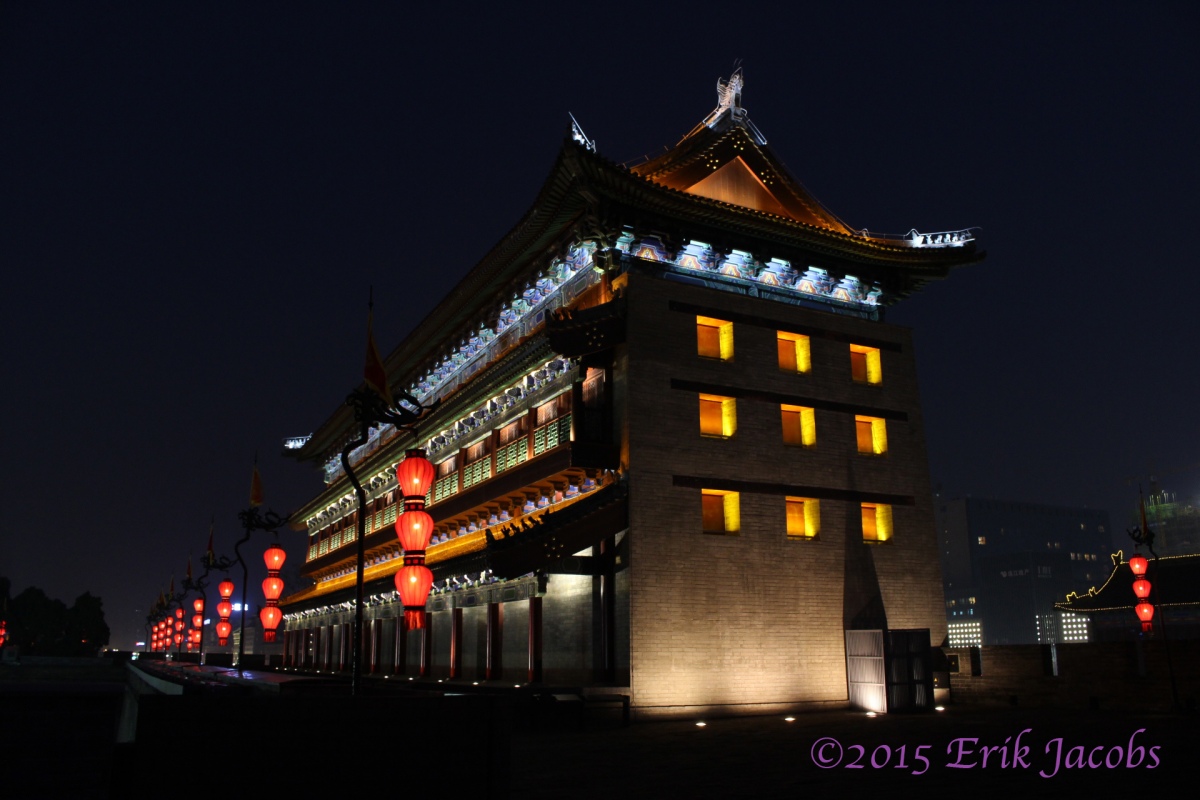 As the sun began to set on my final evening in Xi’an, China, I remained atop the famous 8.7 mile long city wall to take in the sunset and see how the city’s modern buildings looked in juxtaposition to the ancient city walls. After a two-hour bicycle ride atop the wall, this would be a great way to spend the early part of the evening.

While most well known as the home of the Terra Cotta Warriors or as the final stop on one route of the famed Silk Road, Xi’an’s wall and culture set it apart from other cities I have visited in China. The modern and ancient contrast is visible from every location within the city walls. 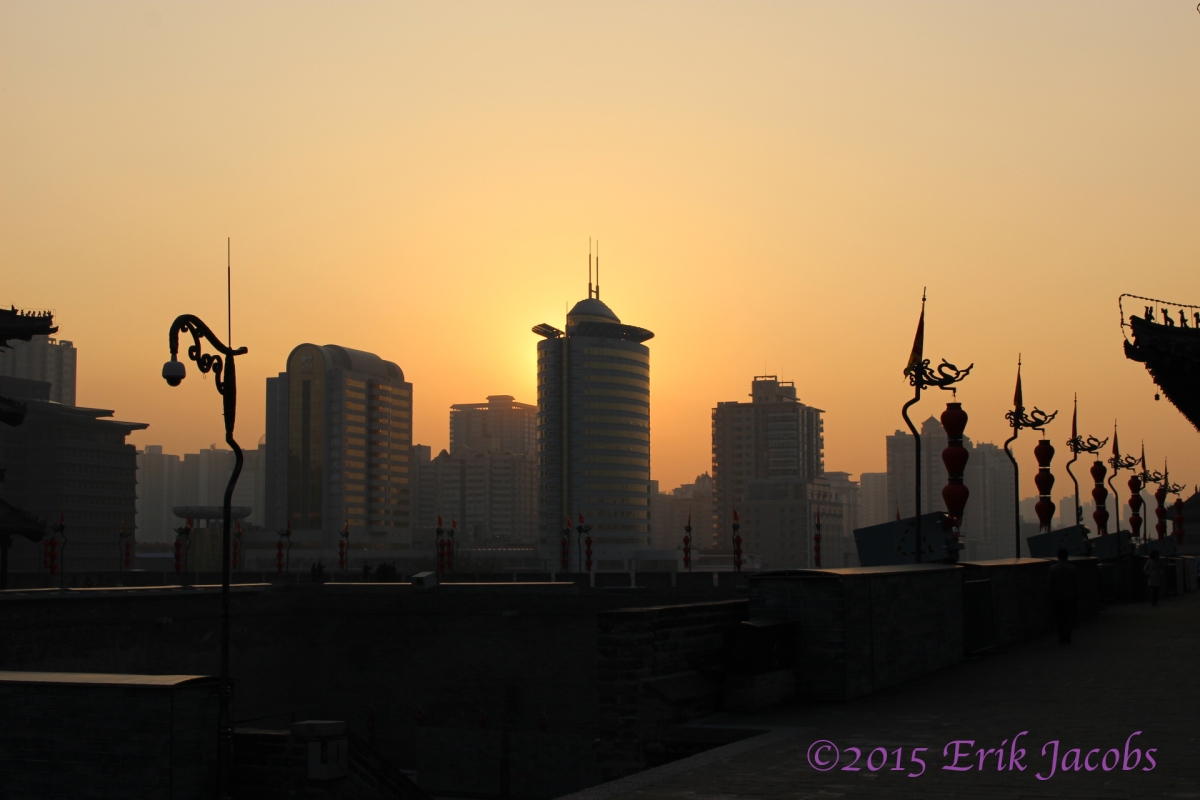 After watching sunset, I headed first to the wall’s South Gate to get a view of the city’s central bell tower. While impressive during the day, its colorful nighttime lights give it a special aura as traffic fills the streets which encircle the tower.

I continued walking on the wall and encountered one of the most impressive architectural features on the wall outside of its many ramparts: the bell towers. This was the South Exit’s bell tower.

Another impressive part of the wall is how well it is illuminated for pedestrians and the several straggling bikers as night falls. Beautiful lanterns line the top of the wall for as far as the eye can see. 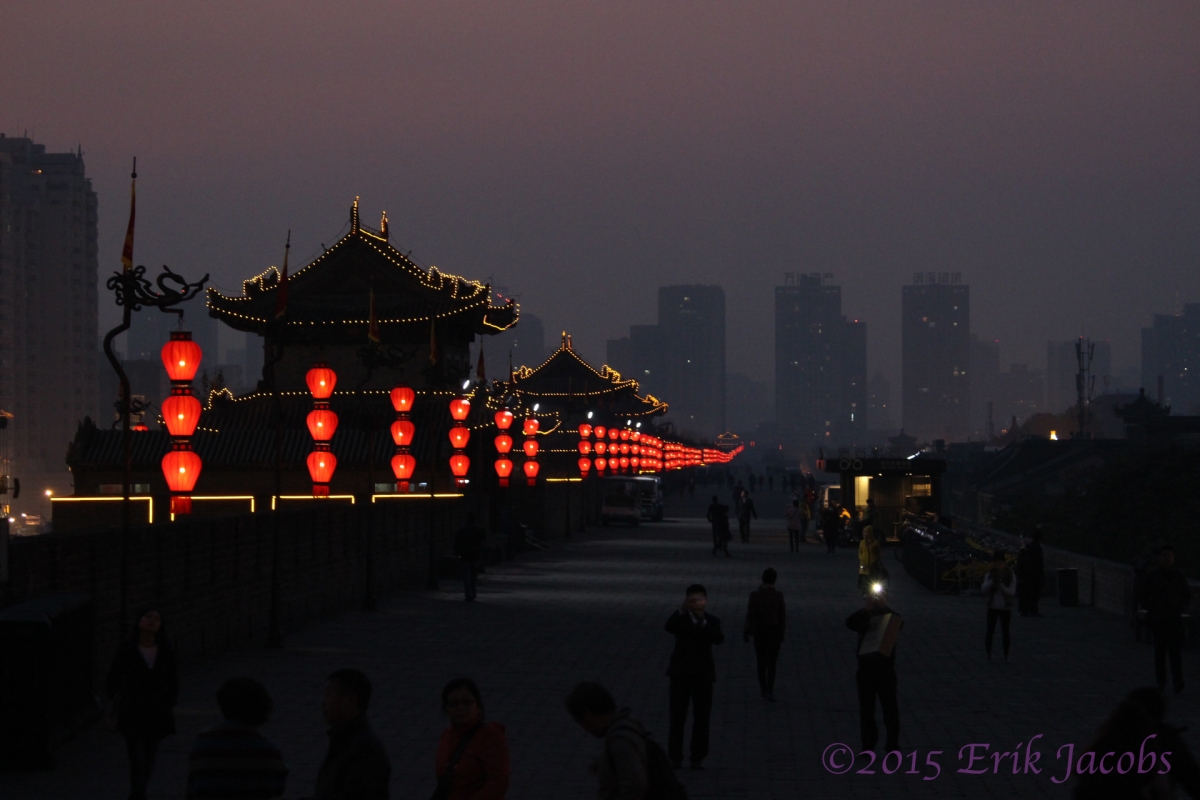 With nightfall, I continued down to street level inside of the park’s confines to see how the wall looked from the outside. I was pleasantly surprised to have a striking view of the city, the city’s wall, and the South Gate.

Even if you go to Xi’an just to see the Terra Cotta Warriors and the famous Muslim Quarter, make sure to spare an evening in your itinerary for the famous city wall.

As my friend and I climbed up the set of stairs leading to the Jinshaling stretch of the Great Wall of China, we encountered some interesting individuals both descending and ascending the steep and ragged stairs.

One would expect large groups of tourists, photographers, or even vendors on a warm (and clear) April afternoon, but these people were unique and special— they were runners.

As a runner from Hong Kong told me, this was no average run. They were near the finish line for the 2015 Great Wall Marathon. You read that right- the Great Wall Marathon. I didn’t believe it at first, but there were hundreds of people running 26.2 miles on one of the world’s most famous landmarks. At this point we still had not seen the wall ourselves, but once we arrived the immensity of the challenge was soon very apparent.

The Jinshaling section of the wall is the most-photographed section of the Great Wall. As it serpentines the ridges and mountaintops, it creates a breathtaking scene. This scenery coupled with weathered barriers was interesting when juxtaposed against marathoners.

Once we reached the Wall, we our exciting 4 hour walk alongside marathoners led to new friendships and some unforgettable scenery.

I have never run a marathon, but I can say with a great deal of certainty that it is one of the most challenging and physically demanding athletic pursuits out there even if it is on flat ground or a paved roadway. The Great Wall Marathon was neither on flat ground nor was it on a paved roadway. Runners were met with steep slopes, ragged staircases, and eroding pathways as they carried on towards the finish line. 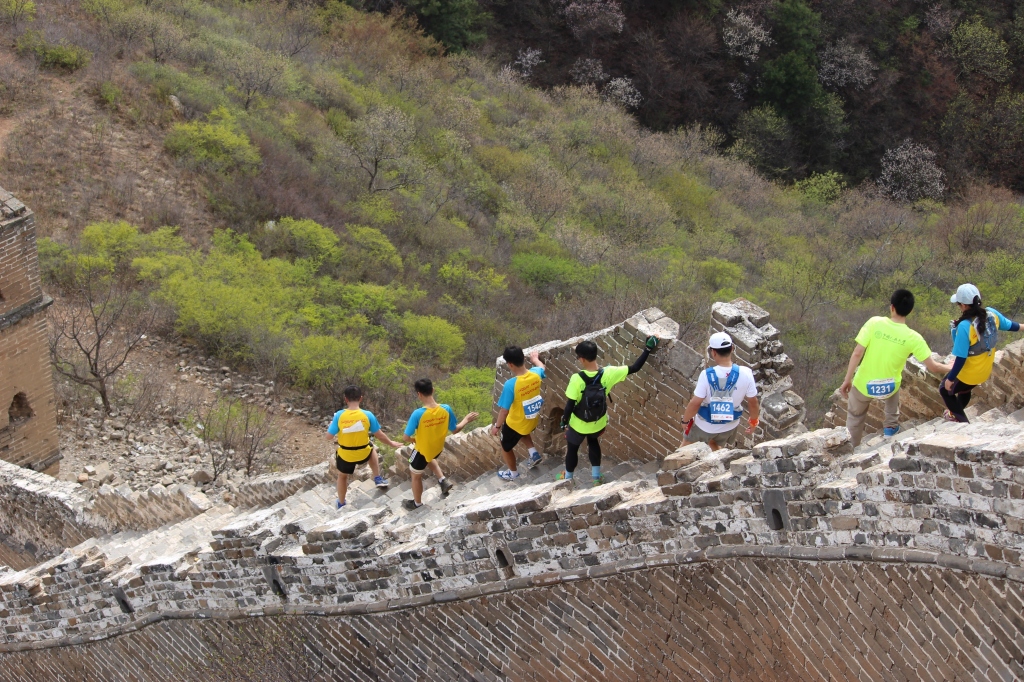 As my friend and I struggled down these staircases, we could only imagine the difficulty and cramping runners faced as they reached mile 20 running on this wall. There was a real possibility for serious injury but they all pressed onward towards the finish line.

In the face of this daunting challenge, many runners were cheerful and could not wait say hello during the marathon.

Runners of all ages with walking sticks stopped to say hello or wave as they continued towards the finish.

Other runners wearing nothing more than a tank top and shorts pressed toward the finish.

Crossing through the watch posts was another interesting part of navigating the Great Wall and finishing the marathon. There were often bottlenecks inside as groups of runners jockeyed for position to keep up their pace.

Our fantastic guide, Jack, was all smiles as he explained the Wall’s history and its importance throughout the duration of our tour. Anyone interested in doing a tour of the wall should definitely stop by the Wild Great Wall Adventure Tours website and book with them (http://www.wildgreatwall.com). The experience was world class and Rick and his team did a great job making sure everything was arranged for us weeks in advance.

Once we passed through the first watch tower, a young couple was giggling at the bottom and eventually ended up talking with my friend and I. Since they were staff for the marathon, they joined us for part of the walk to make nice conversation and talk about some of the race’s details. While there were some communication gaps, they helped make the whole tour memorable. It’s another example of meeting interesting people along the way when you travel.

As the day grew older, we split ways and continued towards the terminus of the tour but encountered even more runners as they braved the Great Wall. About midway through our tour, the Chinese flag provided a great opportunity to see runners hustling down one of the smoother portions of the Jinshaling Wall. 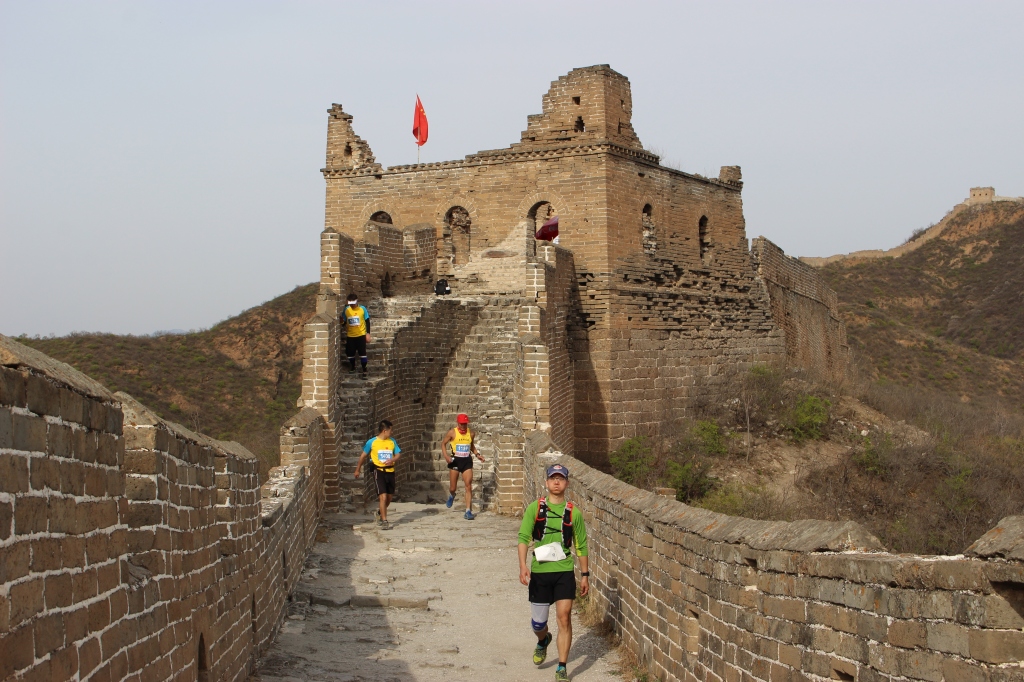 Several hundred yards later, an ominous watch tower was a preview of some of the difficulties runners would face later on in the course. 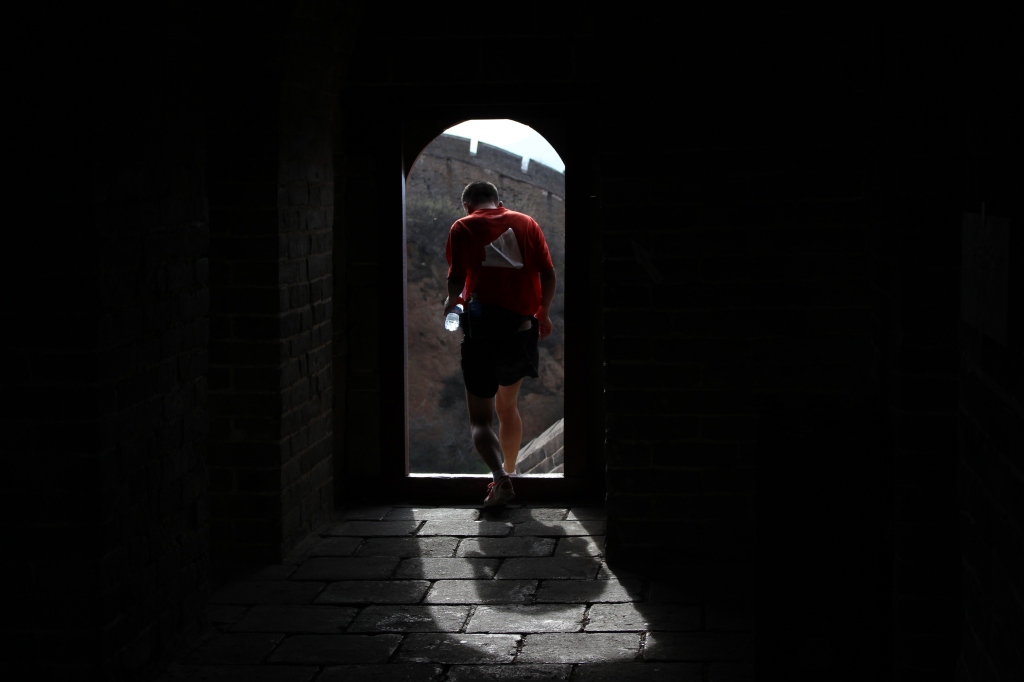 From this point onward, the climb became even more difficult. Steep inclines and declines made some joggers take pause but they kept going against all odds.

As we continued towards our tour’s terminus, there were beautiful scenes around every corner. Looking back at the wall as the sun began to set, we thought about the runners and finally making it to one of the world’s most famous landmarks. 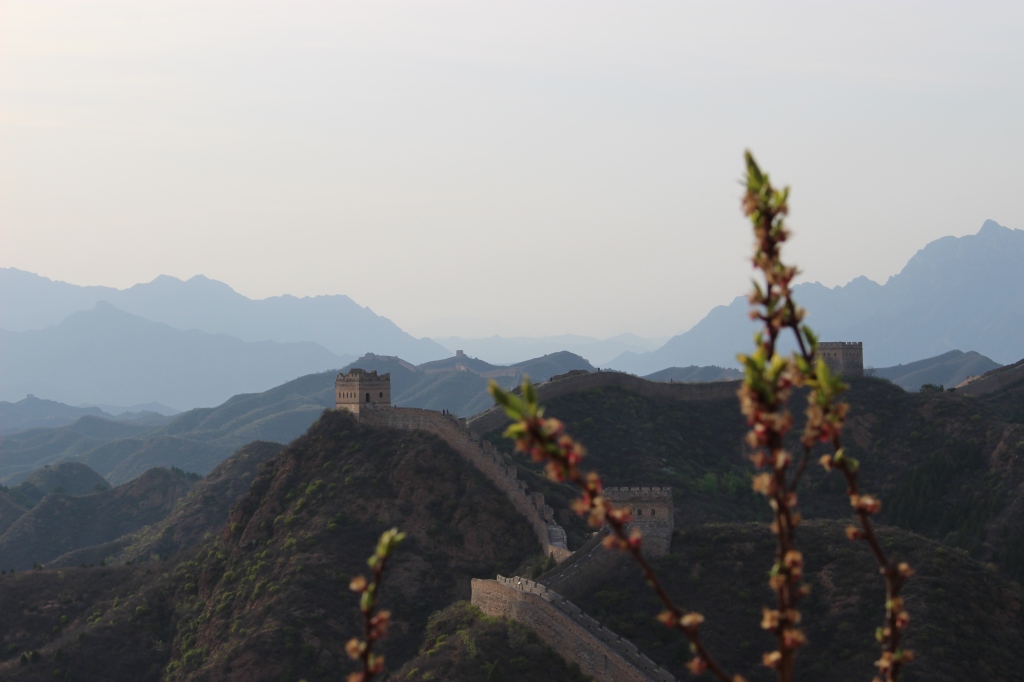 The runners and the marathon were an interesting distraction during the day, but the moment for which we had waited all day finally arrived– sunset. Words cannot describe how beautiful this sight was. 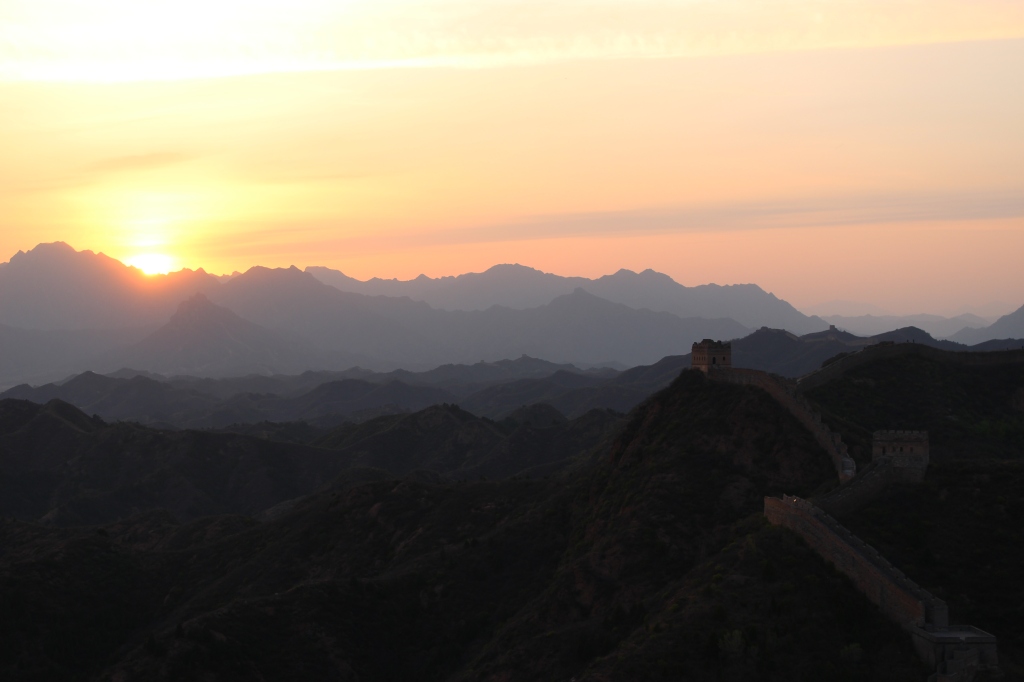